“Some people, no matter how old they get, never lose their beauty – they merely move it from their faces into their hearts.” M. Buxbaum

I remember that chubby face and thin voice as it was yesterday.

They were part in everyday life, of the simple living rich of smiles.

These were other times, the world has changed since then and the society too, but that innocent and funny laughing has made an era and it will always remain in the cinema’s history.

I remember Laurel and Hardy projected in black and white on my grandparents’ TV, they represented a genuine joy letting you forget the present for a moment. 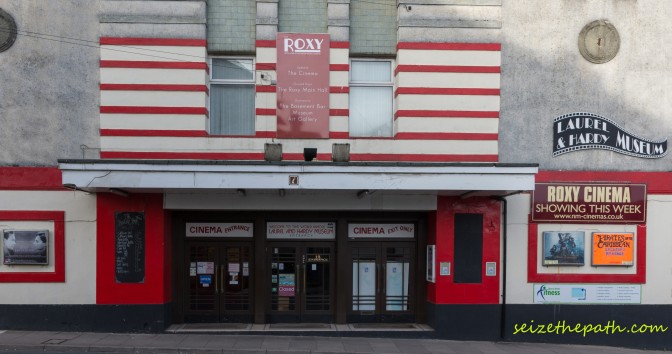 I was a child but I still remember them, Laurel very naive and dreamy, Hardy “wiser” and determined, a combination which became the perfect harmony and comedy.

I recently discovered that Laurel was born in UK and precisely in Ulverston.

It was an unexpected discovery, I was going through the Cumbria’s County to reach the Lake District, when my attention was struck by a label indicating the “Laurel and Hardy Museum”.

The late hours did not allow me to visit the museum, but I managed to capture some pictures as a “duo’s fans”.

Near the museum a statue that reproduces them faithfully has been erected, wonderful, full of feeling although deprived of “pulsating heart”.

Their smile, reflected in the pale sun of the sunset, still contaminates and brings back the memory to their insurmountable gags, as well as the meticulously harmony reproduced in that “statue”.

The entrance of the museum, with a theatre look as per that age, is the intro to their history.

History that today meets the modern art, as the murals representing Laurel’s face on the outer wall close to the entrance.